Many emails / messages that I have received from around the globe have questioned how a job could be so stressful that a person would collapse. Whilst I have provided a reply to many of you privately, many are wanting to know what was the trigger or triggers which I will call “The Catalyst” were. It has never been my intention to write blogs that include misdemeanours however I am going to provide you with the additional insight to assist with what appears to be a common query.

The Maintenance Department that I was responsible for was under great pressure to deliver the safe and efficient execution of the work required on maintenance shutdowns within the time frame allocated. Unfortunately, the department had several safety incidents which not only hurt our people but extended shut periods. The pressure for all Maintenance Superintendents within the Maintenance Department to perform and deliver was at its greatest. To describe the pressure, I would say it was relative to a balloon expanding with air and then passing its limits with the balloon bursting. All of my colleagues (Superintendents) that I worked alongside agreed that it was not sustainable for us to continue to be under the constant levels of pressure and that our health and wellbeing was at stake. Cracks were appearing within all of us and we were all well aware that such pressures could not be sustained.

The day before I collapsed (18th April 2013), there were certainly warning signs that were indicating that I was reaching my capacity.

Mental & Physical Exhaustion – I remember driving into my driveway at 20:00pm (approximately a 14.5 hour day). I remember sitting in the work vehicle, parked in the driveway having a conversation on the phone with a work colleague before hanging up and feeling comatose for approximately 10 minutes. Knowing that I needed to get out of the vehicle and go inside for dinner whilst appeared very inviting, I felt that I couldn’t move a muscle for a short time. Pure mental and physical exhaustion is how I would describe the way I felt.

Running on Empty – Once inside my house, I said hello to everyone, had dinner, had a shower and continued to work from home. The Blackberry phone was continuously ringing as were text messages and emails that just seemed to keep coming. I was purely in a robotic mode replying to whatever hit my phone.

I went to bed at approximately 23:00pm on this night with the thought of many pressing issues that I had to address the following day. Considering I was on my work laptop and blackberry between 20:00pm – 23:00pm attending such issues that had “I believed” needed attending to immediately. I suppose it ends up being more like a 17.5 hour day.

I slept right the way through uninterrupted that night.

Still to this day, I remember a specific email that I received that night prior to me retiring to bed. This email ultimately was the  catalyst to all the pressures that I was under resulting in my collapse.

Reflecting back today on the content of the email, if I was to print this email for you to read you would probably frown with disbelief that I would get so upset to the point that I would collapse the following morning.

Why disbelief? Well I can tell you that the content of the email was really nothing that I hadn’t dealt with before however I had reached my limits, my skin was thin due to being so run down that it I only took a small “event” to tip me over the edge…in why case I collapsed.

It goes to show how consumed I was with work to the point that it was affecting my Mental Health & Wellbeing.

Unfortunately for me, I still pay the price today. 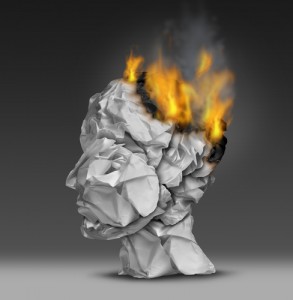